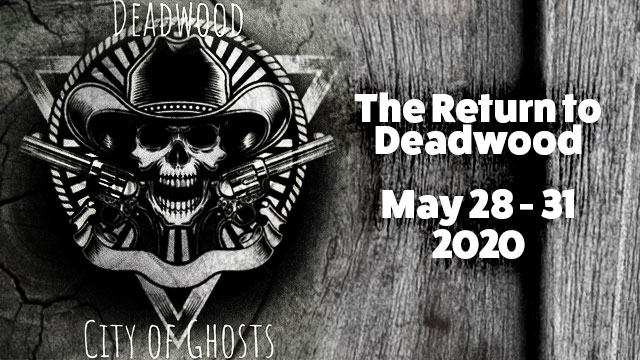 “The Return to Deadwood”

Deadwood was established in 1876 during the Black Hills gold rush. In 1875, a miner named John B. Pearson found gold in a narrow canyon in the Northern Black Hills. This canyon became known as “Deadwood Gulch,” because of the many dead trees that lined the canyon walls at the time. The name stuck, and, over 125 years later, the U.S. 2000 Census cites Deadwood’s population as 1,380; and the town sits some 4,533 feet above sea level. Given its colorful, violent, and lawless beginnings, few could have imagined that Deadwood would someday serve as the county seat for Lawrence County, as it does today.

In 1874, under the command of General George A. Custer, a government- sponsored expedition confirmed the presence of gold in the Black Hills. The U.S. government tried to conceal the discovery from the general public in order to honor the 1868 Treaty of Fort Laramie, which forever ceded the Black Hills to the Lakota-Sioux. The government also dispatched several military units to forts in the surrounding area to keep people from entering the Hills. However, people illegally entered the area anyway, searching for gold or adventure. Despite the efforts of the military and federal government, the American populace learned about the discovery of gold in the Black Hills. Influenced by dreams and greed, the 1876 gold rush was on in the Black Hills. Once Deadwood was established, the mining camp was soon swarming with thousands of prospectors searching for an easy way to get rich. Such luck happened to fall upon Fred and Moses Manuel, who claimed the Homestake Mine, which proved to be the most profitable in the area. Although the Manuels had been lucky, others were not so fortunate. Most of the early population was in Deadwood to mine for gold, but the lawless region naturally attracted a crowd of rough and shady characters. These particular individuals made the early days of Deadwood rough and wild. A mostly male population eagerly patronized the many saloons, gambling establishments, dance halls, and brothels. These establishments were considered legitimate businesses and were well known throughout the area.

By 1877, Deadwood was evolving from a primitive mining camp to a community with a sense of order. The crude tents and shanties that had housed the early miners quickly gave way to wood and brick buildings. The community organized a town government that relied on Sheriff Seth Bullock to keep law and order. The gradual transition of Deadwood from a mining camp to a civilized community nearly came to an abrupt end. On Sept. 26, 1879, a fire started at a bakery on Sherman Street and rapidly spread to the business district of Deadwood. The fire damaged the business district of the town, but rather than give up, the community rebuilt itself. The fire made clear the need for regulations preventing another fire. The local government enacted laws that would permit only certain building materials for building construction. After the fire, Deadwood rebuilt itself in brick and stone rather than in lumber.

In 1890, the railroad connected the town to the outside world. The Fremont, Elkhorn, and Missouri Valley Railroad helped bring the community together as a civic entity. The railroad also brought people to the area from various ethnic groups. Chinese immigrants were among those building the railroad. Hundreds of Chinese came to the Black Hills looking for work in mines or commerce. Many settled in Deadwood, where they sought work in restaurants, laundries and stores. By the end of the 1880s, Deadwood had a Chinatown, which was at the northern end of present-day Main Street. The Chinese managed to establish a district and a fire department for themselves, but struggled in nearly every part of society. Often denied equality in a dominantly Caucasian community, the members of Chinatown strived for recognition as citizens of Deadwood. All too often they were subjected to the suspicion and hostility of whites.

Deadwood gradually evolved from a wild frontier town to a prosperous commercial center, due, in part, to the construction of the railroad. Although the community primarily focused on its gold mining industry, Deadwood became the place where people traveled in the Black Hills to conduct their business. Despite an 1883 flood, and another fire in 1894, Deadwood prevailed through many hardships. In March 1878, Paul Rewman established Western South Dakota’s first telephone exchange in Deadwood. Dakota Territory became the states of North and South Dakota on November 2, 1889 (Dakota Territory also included areas that encompassed present day Montana and most of Wyoming). Deadwood moved forward into the twentieth century, but the image of the wild West town has lingered, due to past events and the individuals responsible for making the town into a legend. Figures like Wild Bill Hickok and Calamity Jane each left their mark. Hickok, a legendary figure even in his own lifetime, was shot in the back of the head by Jack McCall, while playing poker at the No. 10 Saloon on August 2, 1876. Calamity Jane was renowned for her excellent marksmanship, preference for men’s clothing, and bawdy behavior. Although Deadwood had its tough individuals, others were gentler in nature, such as Rev. Henry W. Smith. Preacher Smith was the first Methodist minister to come to the Black Hills. Smith was mysteriously murdered on Sunday, August 20, 1876, while walking to Crook City to deliver a sermon. These individuals are just a few of the many notables buried in Mt.Moriah Cemetery, which was established in 1877 or 1878.

Our group has a reserved room block and we will be staying at the Historic Silverado Franklin Hotel. Please mention “Open Range Events” events when booking your stay.

The Historic Franklin Hotel has been greeting guests of distinction for well over a century, such as Theodore Roosevelt, William Taft, John Wayne, Buffalo Bill Cody, Babe Ruth and world heavyweight champion John L. Sullivan were among the hotel’s guests in its heyday. When former President Theodore Roosevelt returned to Deadwood to visit his old friend Seth Bullock, he chose the Franklin Hotel for his stay.

The Silverado-Franklin Historic Hotel is nestled between the pine-covered peaks of the Black Hills, at the top of Deadwood’s Historic Main Street. To reach Deadwood, take exit 17 (U.S. 85 south) or exit 30 (U.S. 14A west) from Interstate 90. Follow Historic Main Street until it takes you right to the front doors of the Silverado Casino and Historic Franklin Hotel. Parking can be found a block away, (these are small blocks) across U.S. 85, in front of the Deadwood History and Information Center (Deadwood’s historic train station).

Getting to the Black Hills

The Black Hills are serviced from Rapid City Regional Airport by three major airlines: Northwest, United and Delta, which provide direct flights from Denver, Salt Lake City, Minneapolis/Saint Paul and Chicago. Interstate 90, which runs along the eastern and northern boundaries of the Black Hills, is the region’s major thoroughfare. For more travel information, contact the Deadwood Chamber of Commerce at 800.999.1876 or Black Hills Central Reservations at 877.458.3723.

Please note: Tickets are nonrefundable, and locations and itinerary are subject to change at last notice.

Please also note: locations and Itinerary are subject to change at last notice. This is a ticketed event, and there will be NO REFUNDS available.

Breakfast on your own

Sleep in, walk the town, breakfast on your own.

(Location to be announced.)

We will be Investigating the Adams House along with 2 other locations. THOSE WILL BE ANNOUNCED SOON. We will be divided up into 3 groups and then those groups will be divided again on each floor at each location.

We will rotate each location every 2 hours. We will have our lead investigators to investigate with, or, once on location you may investigate the location on your own once inside that location with permission of location. Please do not leave a location to go to another location without your group.

Please refrain from heavy alcohol consumption before or during any investigation. If you are suspected of being drunk or on drugs, you will be asked to go back to your hotel room. Thank you in advance.

Please respect your fellow investigators, and most of all PLEASE Respect these historical buildings and their historical furnishings. Please be mindful when sitting on or touching certain furnishings or objects in the location. Designated areas for sitting will be available per location.